No request is too big for Lake Forest event planner Stacey Moe who always has the perfect touch.

If there’s one person who’s always the life of the party, it’s Stacey Moe. The Lake Forest stay-at-home mom turned event planner has placed her ‘undeniably unforgettable’ stamp on a number of special occasions all over the North Shore, including birthday parties, weddings, baby showers, bridal showers and retirement celebrations—and has plans to be “the next Paramount Events” and “a sought-after planner to the stars,” she says. “I’ve never been a small thinker, and I want to have a business I can some day pass on to my children.” 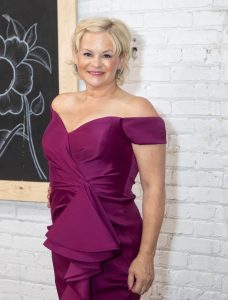 In fact, it’s her three children that gave her the push to turn professional, launching Stacey Moe Events last fall. “Though I’ve just marked my one-year anniversary, I like to say that I’ve been planning custom birthday parties for my children their whole lives,” she admits. That includes Halloween-themed bashes for her youngest daughter, born November 6, which have morphed into a popular adult costume party attracting 150 people annually. There’s also the backyard campout she organized for another daughter, called Camp Olivia that became a turning point for Moe in September 2014. “I remember putting photos of that event on Facebook and jokingly said, ‘I can do this all day if anyone wants to hire me,’ and I got two calls that same night.”

For 10 years after leaving a lucrative corporate sales position in 2003 to focus on raising her children, Moe had been trying to reinvent herself and discover a new career, especially as her oldest child went off to college. “I finally had the freedom and flexibility to do what I love, I should have been doing this a long time ago,” she admits. Her passion for party planning hinges on her desire to be a connector and make a difference in other people’s lives. “I’ve always sort of looked at my life backwards and wondered how I would make an impact by the time I left this world and I guess I didn’t realize how that would manifest itself until I started party planning,” Moe says. “I’m creating those unforgettable milestone celebration moments that people will remember and pass on for the rest of their lives. That is very powerful to me.”

She gives examples of crafting a children’s birthday party with a dinosaur versus pirates theme and hiring a Jack Sparrow actor to wow the little ones. Or, most recently, putting together a combination 50th birthday and White Christmas holiday party for nearly 200 guests. “Creative styling is really my sweet spot,” she says, preferring to partner with local companies as much as possible for execution, including Lake Bluff’s Heller Catering and Carousel Linen Rentals in Highland Park. “I’m a very visual person and love to put a theme around every event to really create an experience that won’t soon be forgotten.”

Nor has she been forgotten by a dedicated client base that has continued to hire Moe and offered referrals. “A lot of my clients are people that aren’t creative or planning stresses them out or, on the converse, they are creative but don’t have time to implement,” she says, noting how the advent of Pinterest has made expectations so much higher for parties to look perfect. “You can’t just go to the party store anymore.” In her case, social
media has actually been a boon for her career. Facebook groups like North Shore Mom Spot in particular have been helpful to connect her with prospective clients. “It blows me away sometimes how far I’ve come in a year. I’m at the point now where I’m ready to take the next step,” she says, which, in 2016, includes moving her five-person team to another office outside of her home and moving inventory to an actual storage facility. “I’ve been using a neighbor’s walk-up crawl space,” she jokes.

In true Stacey Moe fashion, the new year also offers a chance to look at new trends—‘out’ is all the burlap and lace, Mason jars and chalkboards seen at popular rustic events and ‘in’ is rose gold and crystal and unique food experiences (think taking food off branches of a fake tree). “That’s the level where event planning is going and it’s stretching the limits of a traditional event planning company,” says Moe. “That’s where an independent planner like myself can come in to create anything a client wants and stay on budget so they receive an incredible value in more ways than one.”

Moe also has tips for keeping your holiday parties festive
and memorable:

“I’m all about the details for the holidays. For a sit-down dinner, fold napkins like Christmas trees (find instructions in a Google search) and include an envelope with conversation starters and trivia at each seat (for the children’s table you can give them popular holiday icons). The best idea I’ve ever heard, from my friend Lynne Kennedy, is to rent a snow-making machine and have fake snow gently falling down in the room
during dinner.”

“For New Year’s Eve, keep your Christmas tree up but take down the ornaments and replace them with disco balls and clocks. Also offer a ‘bubbly bar’ and let guests pour their own champagne. This always makes a beautiful, festive entrance. I also suggest placing drinks at different heights, such as on cake stands or tiered serving trays.”

“If you can afford it, hire a photographer (there are even some talented high school/college students out there) to document memories. Provide a list of everything and everyone you would like to have pictures of, and always suggest they arrive early before guests start moving things around.”

From the December 2015 Issue of Forest & Bluff